I’ve recently added another stove to my little collection. When I began backpacking, about 18 years ago my gear was budget brand and heavy. Through the years I have upgraded and changed. The first stove I had was a solid fuel ‘hexy’ stove which cost about £4 with several fuel tablets. I still have and occasionally use that stove. Soon after I moved to a gas stove, a Coleman I think with extendable pot supports. It worked well and still does but it rarely sees daylight these days.

Moving from gas to liquid fuel 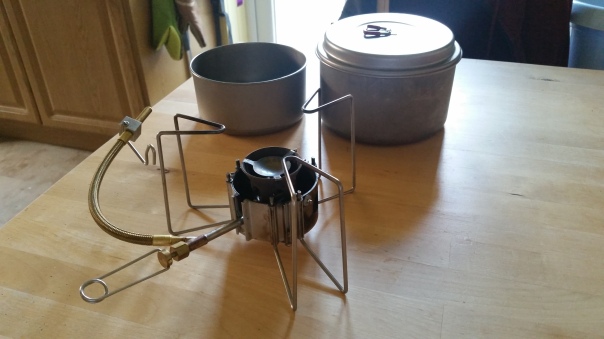 Going lighter, going back to gas

I began to re-evaluate my pack and its contents and decided I couldn’t justify the weight and space taken up by the dragonfly and its fuel bottle. The smallest, lightest stove I could find without paying silly money was an MSR pocket rocket. The reviews were positive and the stove is tiny.

The Pocket Rocket is a really good stove, its powerful and gets water to a boil in a decent time and it weighs only a few grams. I had moved from using a pan in my cookset to a titanium mug to save weight. A 100g gas can, lighter and several drink sachets fit nicely inside the mug leaving only the stove itself outside making my new and improved (solo) cookset a heck of a lot lighter and smaller than the petrol stove, fuel bottle and pan it replaced.

The stove is a fairly basic style and as such suffers the same problems as most other stoves (wind and gas pressure). This means I have ended up with a collection of part-filled gas cans! 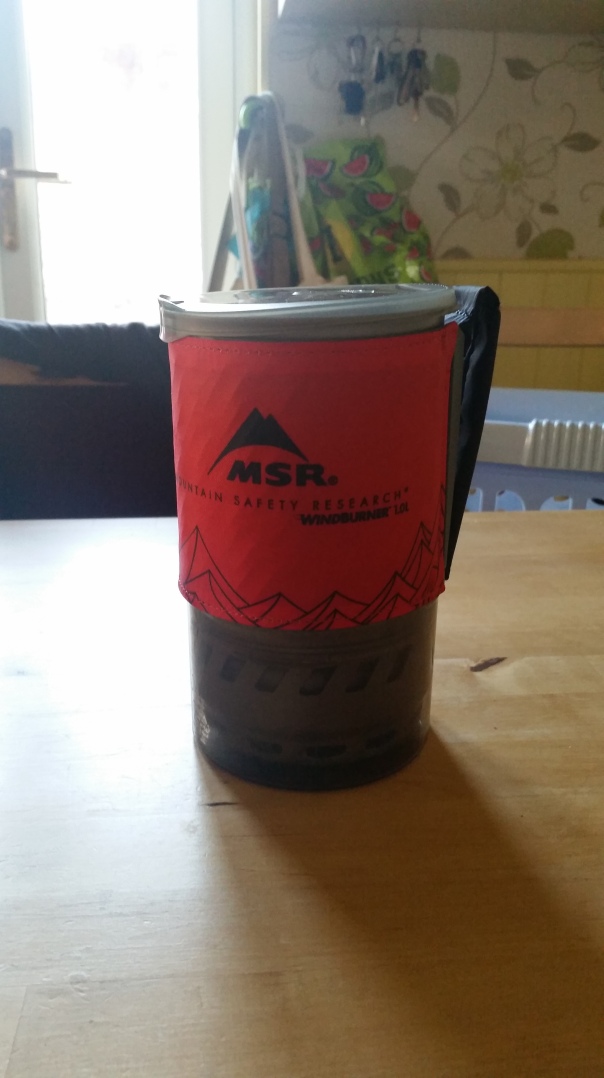 After another trip frustrated by wind increasing boil times to annoying levels -and being unable to cook in the tent porch I started to research ‘stove systems’ (MSR Windburner, MSR Reactor, JetBoil etc). They were all faster to boil and much more fuel efficient so the added weight of the heat exchanger was balanced by the better fuel use.

After reading a load of reviews and having a long-term love of the brand I settled on the MSR Windburner. My third MSR stove!

I’ve only been able to test it a couple of times and deliberately sited the stove in the breeze. The first time I used it I was amazed, I poured in enough water to make a coffee and it had boiled within thirty seconds. I’ve used it again to make coffee and with enough water left over for instant noodles. Again, the boil time was superb (I wasn’t geeky enough to time it!).

(Disclaimer: I’m not paid by MSR and I’ve bought all these things myself. That said, if MSR would like to give me free things they should feel free to do so…)

Cons: Best used out of the wind. Almost useless in really cold weather

Pros: Super-powerful. One fuel bottle lasts a very long time (great if you need to cook for a group or boil all your water)

Cons: Heavy. Slow to set up. Takes up a lot of pack space. Expensive

Pros: Fast! More gas-efficient than the ‘normal type’. Continues to perform as the can empties.