Backpacking with a five year old.

I decided that my son, Edward, was old enough to go on an overnight backpacking trip. He has been on many countryside walks and loves camping. When I suggested to him we went on an adventure where we walked a long way, stayed out overnight then walked again the next day he was very keen.
I wanted to make this intro to backpacking as easy as possible (for both of us) so a route with a youth hostel and short days was planned. 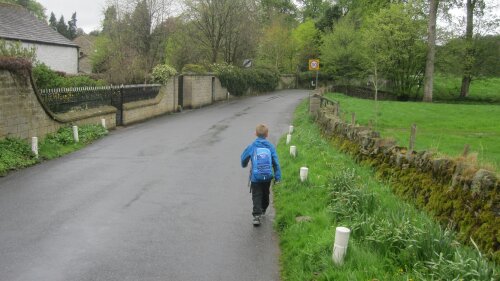 We set off early on Saturday afternoon from Gargrave train station and followed the Pennine way to Malham. A journey of about 6 or 7 miles. The forecast had said heavy rain so we dressed accordingly but we never got a drop. Fantastic! The going was easy, a bit squelchy underfoot but no worries. After all, what is more fun than squelching in mud when you’re five years old and have waterproof boots on?

After about six miles Edward was getting tired and wanting to be there already. A short, steep road section didn’t improve his mood but the sight of Malham below us, a little way ahead did. The last mile flew past and soon we were checking into the hostel.

When packing for the journey I’d let Edward chose the meals. Saturday night’s dinner was hotdogs. Many of them. After dinner we had a short relax in our room, a four-man dorm, also inhabited by a couple of cyclists up in the Dales for a long road race. After a lie down we went to the lounge and spent the evening reading and watching TV (You’ve been framed and the Eurovision song contest). Also in the line were five or so other hostellers, three generations of one family. The grandmother in the family spent the time sketching various views through the window. Ed and I sat reading on the sofa. Edward kept looking up at the sketching lady and grinning. He leaned in close to me and whispered loudly, “I think that lady is drawing me!” She smiled, tore out a page from her sketch book and handed it to Edward. It was a pen sketch of him sat reading. He was thrilled! They then sat and chatted about books and drawing. She even let Edward draw something in her sketch book.
By ten o clock we were ready for bed, a very late night for Edward, about right for me.

Sunday morning came and brought a cooked breakfast (Edward’s choice). We ate, washed up, packed and were on the way around nine am. Sunday’s route was over the tops to Settle. A slightly shorter day of around five miles but with more ascent. We followed a walled track through the fields before a short road section then up and over the hills. A few grumbles about not being allowed to eat his Mars bar (not that close to breakfast) accompanied the early climb. Chocolate soon forgotten when he found a sheep bone and insisted I photographed it.

The miles flew past, Edward finding things of interest all over the place, red moss, caves, sticks, rocks and cows kept boredom at bay. Soon enough we were passing Attermire scar and dozens of fell runners racing out of Settle.

Descending into Settle we made the essential purchases of an ice cream and a drink. Rewards well earned by our efforts.

A few hours later and we were on the train back home our first overnight trip a success.